Whoa-- what happened to the last three months??!

Remember when you were a kid and it seemed like summer vacation, or spring break, or above all, Christmas would just NEVER get here?  Then, of course, you'd be on summer vacation for a few weeks and you'd run out of sh--, er, stuff to do, and then you felt like school was just NEVER going to start again.

And now... oooh, now.  "What do you mean, Christmas is almost here already?  What the hell happened to the last year, anyway?!"

The older we get-- let's hear it from the choir-- the faster times flies.

Sounds silly, but it's true.  An incredible amount of stuff has happened since my last post.  Alex has been in and come back out of the Navy, and shortly after that, she and her sweetheart got married.  And, if I may preen just a bit here, she wore my wedding dress.

Yep, The Husband and I have suddenly become in-laws.  Wait... we were just dating only a couple of months ago, right?

Somewhere along the way, the right hip that's been bugging me off and on since I was (literally) a kid suddenly decided to REALLY make itself known.  As in it ran out of cartilage, completely and totally.  The end result is that I get a brand new complete hip joint replacement at the end of this month.  My view?  They could do it tomorrow and it wouldn't be too soon.  Rather than whine about something that whining does nothing to make better, I will instead offer you a little nookie:

Come on-- you know you want it.  After years and years of being out of print, a quirky novel I wrote called DeadTimes is finally available again.  Do you have a Nook?  Then you can pick it up at Barnes & Noble here:

For those of you who don't need nookie (hee hee), run on over to Crossroad Press and pick it up in some other format.  The Husband, author Weston Ochse, being a man of many and multi-talents, designed the bookcover for me.  Tell me what you think: 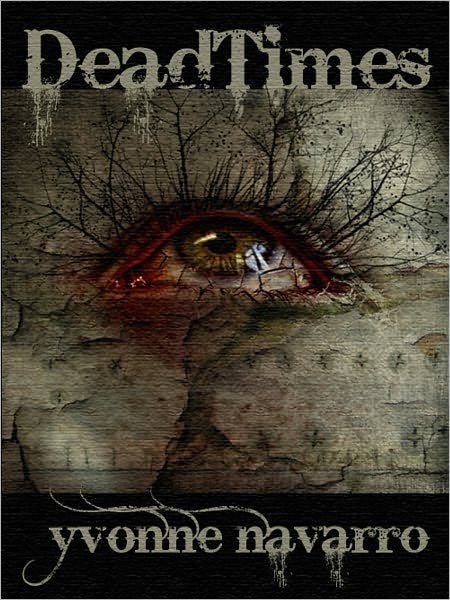 I might be a bit biased, but I think he did a pretty awesome job!

DeadTimes is about a woman who doesn't want to die.  She makes a deal with you-know-who and she gets the short end of the supernatural stick.  Sounds pretty common, right?  But hey-- when have I ever stuck with common?  Nope.  Trust me, there are loads of surprises in here, twists, turns, monsters, magic, you name it.  Yeah, I know I wrote it but it's beautiful, it's dark, it's tragic, it's brutal, it's violent... all wrapped up in a nicely packaged ebook.  "Try it-- you'll like it!"  (Hey, Mikey!)

So I'm hobbling around and as always trying to catch up.  Swearing every day that I'm going to do better by this blog and by the great folks who take the time to read it.  So say hi, drop an opinion, fuss about something-- whatever.  Make yourselves at home.