Then they changed the time for one of the panels.

And I forgot to tell everyone about the fun Interview I had with a Transylvania journalist, which is now posted online. The newspaper is the Transilvania Expres, and Yours Truly is grinning at the Romanian world via a shot from, yes, last year's World Horror Con. No, I have no clue what it says. I can recognize a few words, like vampire, creature, and Buffy. Beyond that...

(please please don't let me remember something else the instant I hit "post")
Posted by by Yvonne Navarro No comments:

What the heck -- where did the end of February and most of March go?  Man, have we been horrifically busy.  Work, projects, visiting relatives, you name it.  Some fun times, some not so fun-- that's life.  Among the highlights of this blur of a month was buying the very first brand new car I've ever owned, then, at mile 17 that I put on it (with a total of 43 miles on the odometer -- I hadn't even signed the freakin' papers yet) getting a written warning from a Highway Patrolman.  Unfortunately I was paying more attention to the whiz bangs in the new car -- mirror, radio, what's this button do?-- than my speed.  A week and a half later I was gifted with an extremely pricey (and annoying) speeding ticket, a real one, by a different Highway Patrolman.  Alas, I will be spending Easter Sunday morning in Defensive Driving School.  ::sigh::

Find of the Month:  A German-made bookshelf unit in the Post Thrift Store, made of three sections of beautiful varnished knotty pine.  One of those sections is a curved corner unit.  I rearranged the other two sections a bit to fit my office and it's just fabulous.

My ancient cousin fell and broke her hip 2 days before I had her scheduled to go into assisted living.  She had surgery and went from the hospital straight into a nursing home and we had to empty out her apartment.  She was quite the pill for the first two weeks but is finally calming down, so we might be able to get her into assisted living after all.  For awhile she was so difficult that they wouldn't have accepted her.

Goblin came through his surgery with all the grace of a drunken sailor.  My poor boy was on the table for quite a bit longer than anticipated, with the accompanying increase in anesthesia.  It seems the cyst was attached to some kind of larger mass underneath.  The vet speculated it might have been caused by an old injury.  (What old injury?  ::grrrr:: to his original owners...)  Anyway, they got it all, the biopsy came back negative, and my staggering little boy is now his old self but with a nice long scar from 14 (ow ow ow) stitches. Ghost is fine, cute as a button and my CuddleBug.  Poe is also fine.  She likes Daddy's nose. 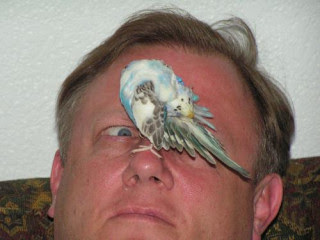 The Husband (
Posted by by Yvonne Navarro No comments: