"I am an Animal Rescuer. I have patted a mangy head with a bare hand. I have hugged someone vicious and afraid. I have fallen in love a thousand times. My work is never done, my home is never quiet, my wallet is always empty, my heart is always full."

"Rescuing one dog may not change the world, but for that one dog, the world will be changed forever."

Today is my Big Boy, Goblin's, 9th birthday. He spent the first 16 months of his life thrown in a backyard, underfed and starved for attention. When we got him, he was completely untrained. Well, except that the numbskull I got him from had taught him to jump and put his paws on her shoulders-- nothing else. He was terrified of The Husband and most men and showed it with fear aggression. The night I brought him home he crawled onto the couch, then curled his lip at me because of what he thought I might do; I wiped the snarl off his muzzle with my fingertips and it never came back. He was afraid to eat and would just stand over 3 out of 5 meals, staring at us in fear.

Now he's just a Big Grizzled Smush Bug who waits for me to come out and tell him to finish his food ("You'd better get that piece, or I'll get it!"). He's not completely without fear, but he's probably as good as he will ever get. He snores and makes other bodily sounds that are not so attractive, but we love him anyway.

In short, he is an Awesome Rescued Great Dane.
Posted by by Yvonne Navarro No comments:

No Better Time Than Now...

... to save a bit of moolah on some great dark fantasy and horror titles!  Think Christmas shopping.  No, really-- it's only five months away and there are some AWESOME bargains to be found here.  Speaking of an awesome bargain, The Husband's incredible short story collection, Multiplex Fandango (25% off!), is one of them.  So check out the goods and splurge splurge splurge! 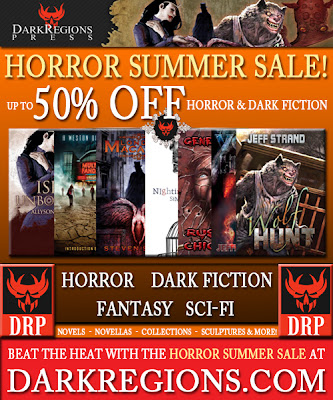 I must have a sign across the front windshield of whichever car I happen to be driving on any particular day.  (Friends, take note and be cautious about lending me your vehicles.  Unless, of course, you are feeling particularly adventurous or are counting on your insurance company to provide you with an entirely new ride.)  This is a sign that I can't personally see, but there are Buttwads out there galore who can and who seem to take immense pleasure in follow its directions literally. 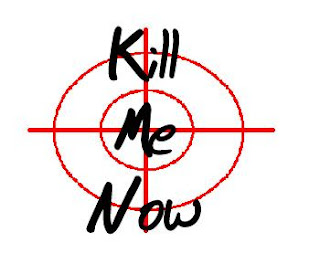 Take, for instance, the woman driving the little gold four-door job on the day I had my hip pre-op appointment slightly less than seven weeks ago.  Miracles can happen in the space of a single second, and it is truly a miracle that I made that appointment.  See, I was on the bypass, in the left turn land by the East Gate of Fort Huachuca.  The light turned red, and we in the turning land got our green arrow.  I wasn't even the first to turn.  Nope, not first, or even second.  I was THIRD.  So as I'm trundling up to turn left, here comes Little Miss Gold Car, who blows the red light at a fast and furious sixty-plus miles per hour.  She never even hit the brakes.

Yep.  One second more would have put me right in front of her, and she (and her passenger) would have solidly embedded themselves and their gold car into the passenger side of my Charger.  The Charger is a no-kidding heavy ride wearing a beautiful coat of metal-flake red, but at that speed... can you say "rollover?"

And then there's today.  Coming off Post again, this time driving the Montero, I had the green light.  I was in the correct lane, the one to go straight.  I headed into the intersection at about 20 mph or so (not having to stop because the light was green and stayed green, and not going very fast because this part is coming out of a 15 mph gate exit).  And when the red Nissan SUV accelerated and TURNED LEFT DIRECTLY IN FRONT OF ME, I had to slam on the brakes so hard that the passenger back seat lock released and it slammed into the back of the front passenger seat before bouncing back again.  (Thank God there was no passenger in it!)  And you know what?  The young male Buttwad driving the Nissan looked me straight in the eye, SMILED, and never broke eye contact during his entire turn.  Yep, he turned in front of me and kept smiling at me the entire time he was trying to kill me!

And then, about 45 minutes later, there was yet another Buttwad who decided that a yellow light on Coronado does not mean slow down.  Nuh-uh.  It means Speed The Hell Up And Run Through The Intersection On The Red Light So That The Vehicle Turning Left Has to Slam On Its Brakes.  This guy could even be called a Buttwad Squared -- B2 -- because he was driving a (white) BMW.  And did I mention that not long after they built this intersection (where Walmart and Lowe's are across from each other), there was a vehicle accident so horrible that people had to be airlifted to Tucson for  treatment despite us having a hospital only five minutes away?

So I warn you all:

PROTECT YOURSELVES -- BEWARE OF THE BUTTWADS IN SIERRA VISTA!

And you might have someone else check your windshield and make sure you don't have a sign like mine.  (Which, by the way, I borrowed from http://killmeenow.blogspot.com/ -- thanks!)