I would say that it's funny that I seem to post on this blog only when something unpleasant happens.  Unpleasant-- there's a word for you.  A way too gentle word for what I'm about to convey.

I am, admittedly, sitting here and drinking, too much, too fast.  I will say right now that I have no intention of editing whatever words happen to find their way into this post, so please forgive spelling errors, grammar screw-ups, perhaps even sentences that make no sense.  I'm not going to screw around with fancy photo-positioning.  That's just the way it's going to be.

The last time I wrote a blog post, despite my best intentions, was when I lost Dad in November, just two days before his 84th birthday.  But already I see I have to revise what I've said here, because the blog post before that, on July 15, 2014, was pretty cheerful.  It even included a picture of me and Grendel, the beautiful Great Dane-- our fourth-- that we drove all the way to North Carolina to pick up in March of 2014. Here's his "official" adoption photograph, showing The Husband, Weston Ochse, Grendel, and me.

Yes, that's a long time ago.  I have been meaning to post about my sweet, sweet Ghost, who died in my arms last October 19th.  Really, I meant to.  I even have a list of things on my computer that I want to include.  But every time I think about doing that post, I sort of... shut down.   It hurts too much when I think of my sweet Cuddlebug and how she left me that night. 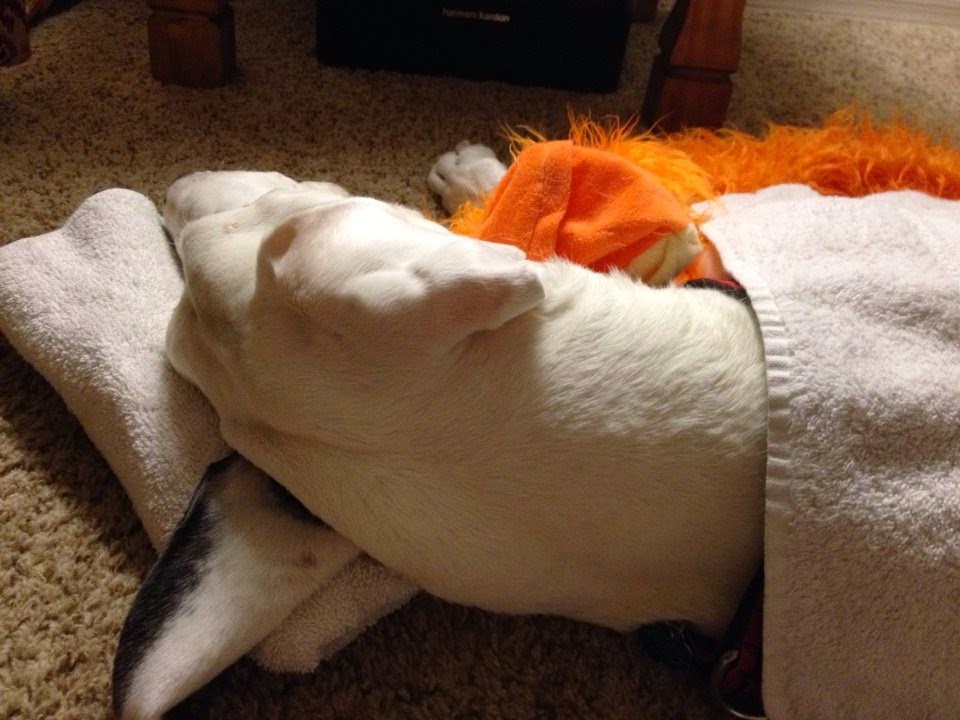 Well, baby, the pain ain't over yet.  In fact, it's probably just getting a good grip before it really rips in with big, sharp teeth.

How's Goblin? you ask.  You did, right?  He's... old.  Especially for a Great Dane.  Last August he turned eleven, and the year before that, a few days before his birthday, he bloated and went through surgery and recovery. Now he's a tottering, white-faced old man (not doddering-- there's nothing wrong with his mental faculties); the arthritis in his spine makes him barely able to walk, the medicine that gives him that limited ability and deadens the pain just a bit makes him nauseous, and the nausea medicine screws up his stomach.  In the meantime, believe it or not, he still seems happy.  That quality of life thing: he eats heartily, he's happy to see me, he wants to be petted, he'll drag himself up to greet me (or anyone) at the door, he barks when the doorbell rings, he'll chew on a Nylabone or nibble on a stuffed toy.  So far so good, despite everything else.  So we hang on.  For now.

We adopted him a year ago March, in 2014.  Not long after, I began to question the way he panted, and suspected he had hyperthyroidism (the opposite of hypothyroidism). The vet thought I was wrong... until the tests, three times repeated, came back.  Yes, he had it.  And yes, it was caused by the only thing that would do it: Thyroid cancer.

So, surgery.  His entire thyroid was removed, and he made it.  It wasn't easy, and it wasn't a quick recovery.  The perithyroid glands that control the body's calcium level ended up being taken out with the thyroid.  Two pieces of tissue that looked like perithyroid material were re-seeded in the muscle, and eventually at least one of them took-- but not before a major fight with his calcium levels.  At one point, he was literally unable to walk and we feared he had Wobbler's Disease.  Then we finally got him straightened out on prescription calcium, with rechecks every so often.

I've been noticing his energy level drop and his panting increase.  There was a hint of worry in the back of my mind that the Big C had returned in his throat-- I was told that could happen, but if it did, it would be a slow growing thing.  He hasn't been doing much beyond eating and sleeping, not even getting up when my faux daughter, Clara, visited last Tuesday.  I've never seen a dog that didn't so much as rouse when a person he or she liked came around.  One night after feeding him, he went out to potty and I found him a few minutes later, lying on the landscaping rocks just short of the patio.  He seemed just too tired to go those last few feet.

Maybe his calcium level had dropped too low, like it had awhile back when it made him too weak to walk.  Still, he has a good (okay, voracious is a better word) appetite and he certainly hasn't lost any weight. So this morning I called and scheduled a calcium check, sticking the appointment in where I could between other annoying and disastrous crap that has been happening in our lives.  I did some other stuff on the computer upstairs, then headed back down to the first floor at about three-thirty.

And I saw this: 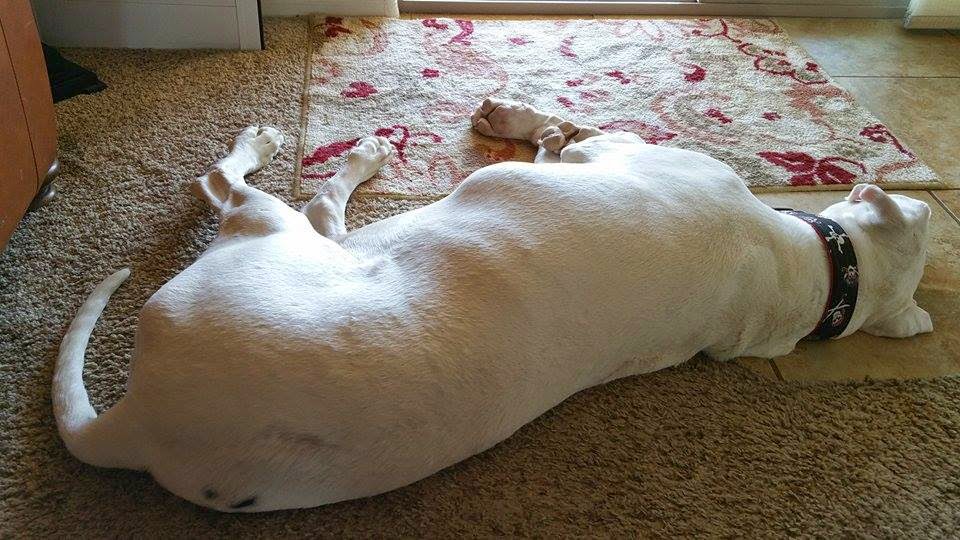 I called the vet and asked "Do you have any appointments open this afternoon?  With anyone?"

I got him in at 5:30.  The vet tried to take a fluid sample and got almost nothing-- the mass on Grendel's side was rock hard.  So they took him back and fired up the x-ray machine.  He was so cooperative that he didn't even need anesthesia for the three shots.  When the tech came to get me, she asked, "Do you want to come back and see?"  I wanted to say no, because I could tell by the look on her face that it wasn't good.  But I went, and four of us-- the doctor, me, and two techs-- stood next to Grendel and stared at the x-rays.  It didn't take a veterinary degree to recognize what was on the display. 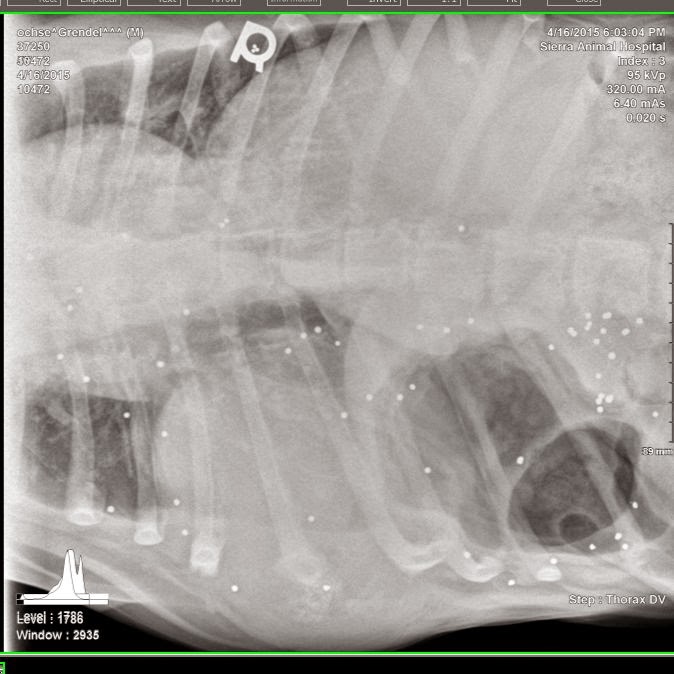 The mass (bottom center, pushing outward) is hard and enormous.  This afternoon I guessed it to be about the size of a baseball, at the vet's, about the size of a softball.  As I write this tonight, it seems, incredibly, the size of a cantaloupe-- or perhaps that's just my terror.  It's growing rapidly and the vet said it probably wasn't noticeable until I saw it today because it's been growing into his body cavity, where one lung is wrapped around it and it's pressing on his heart.  Grendel is sort of "left-sided," which is to say that he tends to lie on his left side rather than right, another thing that aided in disguising it.  Even so, make no mistake about it-- I smooch, hug, rub, and love on these dogs constantly.  Just last night I wrapped Grendel in a bear hug as I fed him, and I felt absolutely nothing wrong with his chest.

The thing inside his chest is an alien, and it's a killer.  The vet doesn't think it's operable because of its size and position, but even so, she's going to ask two more doctors tomorrow, including Grendel's main vet.  I am normally an optimistic person, but even I have to be realistic sometimes.  I have to think about how he doesn't get up except to eat and potty (and sometimes he misses the mark on that), and how he has so much trouble breathing.  How he won't play anymore, won't even chew on a bacon-flavored Nylabone.  He sleeps, and he eats, and that's about it.

He doesn't seem to be uncomfortable, but he's a street dog.  Found as a stray, chest peppered with birdshot (you can see the metal dots on the x-rays).  Dogs normally hide pain as a matter of instinct, so who can say for sure that he doesn't hurt?  That this alien mass that's pushing outward on his ribs isn't making him ache?  We know for sure that he struggles to breathe, sometimes even while lying down.  The biggest indicator?  He no longer lies on his left side, and it's obvious that's because it pushes the mass harder against his lungs.

We're going to lose him.

I haven't cried yet (okay, as of 10:44 p.m. that's become a fib).  Right now I'm full of anger at the unfairness of it.  Anger because when Grendel was found, he was full of birdshot, he had parasites and heartworms and overgrown lumps, he was a blind stray, his eyes and ears were infected, and he had open wounds.  He was underweight and scarred.  And still... he had love, for anyone who petted him and offered him the tiniest bit of affection. 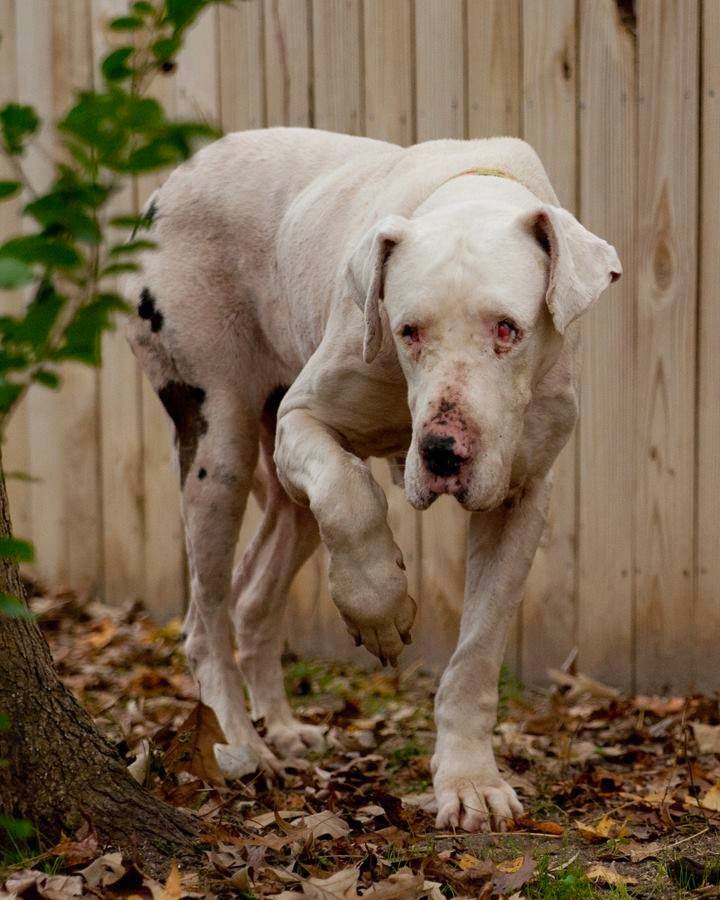 Still he had that sweet, sweet soul.

He was rescued, I think, around the end of October or so in 2013.  We've had him since March, 2014.  This lovely little Street Thug, whose teeth are prematurely broken and worn away and who melts at the slightest kind touch, will have had less than a year and a half with us.  We pulled him through one type of cancer only to lose him to another, more aggressive kind.  And I am filled with impotent rage because the universe will not let me give him enough years to make up for the mess his life was before we became blessed with his presence.

We love you, sweet Grendel.  We will hang on as best we can, for as long as you can. 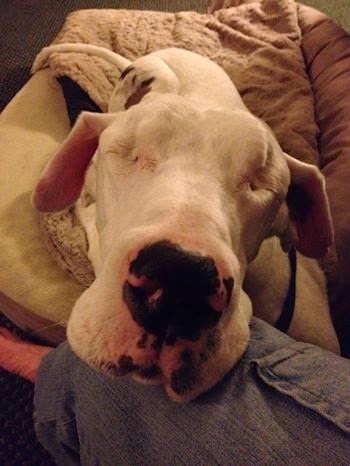 Posted by by Yvonne Navarro 9 comments: