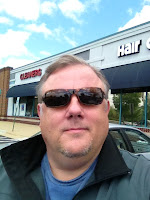 I will tell you right upfront that there are folks out there in Readerland who are going to find these posts tedious.  I'm sorry for that, but I'll do my best to keep them interesting.  They're going to serve two purposes: (1) To keep The Husband apprised of daily doings, and (2) to retrain Yours Truly, or maybe just teach, because I have never been really good at keeping this blog this up to date, into updating more often.

The Husband headed to Afghanistan proper on Tuesday, sporting a new haircut (it must be a guy thing).  Communication between us will be cut drastically, so think of these posts as getting to listen in-- sort of-- on conversations.  I'll try to leave out the really mushy parts, but if something slips in now and then, you'll just have to suck it up.

The Monday before he left I came home from work and potted the rest of the plants and flowers I'd bought at Home Depot and Lowe's over the weekend, then repotted a few that i decided had been poorly placed.  In a spurt of stunning design decisions (okay, maybe just plant placement -- ha ha), the front of the house and back patio 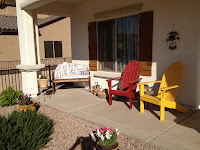 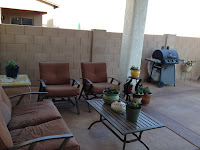 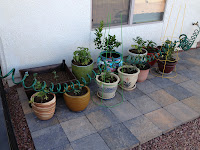 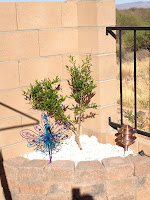 ended up looking pretty good.  I planted a little pomegranate tree in the southeast corner and took a couple of the celosia aside to put in a green pot that I gave to Dad last night for his patio.  The rest of the plants are on  the stone patio I assembled awhile back, which will eventually (uh...) be covered by a sort of "screenhouse" I plan to build to deter the grasshoppers that ate Every. Single. Living. Plant. in the backyard last summer, including something like six or seven small trees.  That will NOT happen again in 2013. 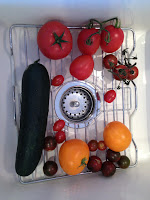 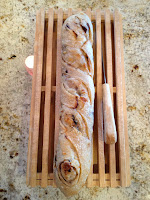 At lunch today my friend Clara and I went to Farmer's Market, where I indulged in locally grown tomatoes (until mine grow, and let's face it, I probably won't get that many), a cucumber, and a loaf of Stone Junction Olives and Italian Cheese bread by the Guadalupe Baking Company.  I dipped into this right after taking the photo, and WOW!  Yeah, it was that good.

Finally, yesterday Clara and I went to investigate a sign that has appeared on a certain long-empty building that used to be the former home of Walmart.  We both agreed that having this store close to us, as in seeing it Every Single Day, is probably going to be hazardous to our wallets.  It looks like it will be awhile before it opens, so we'd better start saving up now. 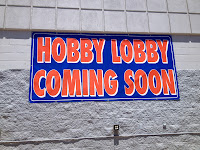 While on vacation in Virginia with The Husband the week before last, I got bit by four, yes, FOUR ticks.  Setting aside the fact that by the time I realized the fourth one was biting me I was physically freaking out, my medical manager here was not pleased when he looked at my arm (bite #2) and the back of my neck (bite #3).  Although the other two bites seem to be healing/disappearing, these two are hanging around and red and lumpy.  It's interesting to hear "Humor me and take some doxycycline." from a medical practitioner.

Okay, it's late, and I'm tired, courtesy of the antibiotics.  I'm going to toss in the photos but not proofread.  I proofread too much, which is probably why I don't write nearly enough-- I'm too busy proofing as I go instead of when I'm finished... or both!
Posted by by Yvonne Navarro No comments: