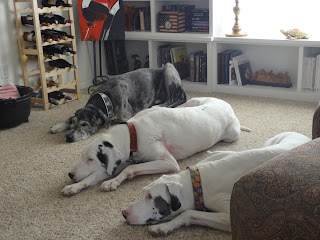 So after work I grab up Goblin and Ghost, load them in the Montero (those around town know it as the "Zombie Emergency Response Vehicle"), and trundle off to the vet for shots and to let the unlucky vet poke into Ghost's butt a couple of times. The lock on the back door of the Montero broke a few years back; Dad fixed it, but it took something like three weeks before the parts got in, then more time to get him to actually do the repair, yadda yadda yadda.  Ultimately it got fixed... only to break again about six months later.  This time, in the spirit of Good Ol' American Redneckness, we fashioned a rope around the inside handle that we can use to pull and hold the inside handle open while we inch around to the back and open it from the outside.  If you let go, you get to start all over again.

In the vet's parking lot, in complete and utter defiance of my command to "Wait!" which Goblin absolutely knows, Goblin catapults himself out of the back of the truck, with Ghost right on his heels.  He promptly gets his back legs tangled up in the rope I didn't have the chance to push out of the way, and down he goes.  Like an embarrassed human, he's right back up, favoring his right back leg and shooting me a look that seems to say, "Act like you didn't see me do that!"  I inspect him on the front walk, but he seems fine, if a little dusty on the hind end, and by the time we get inside he's not even limping anymore. 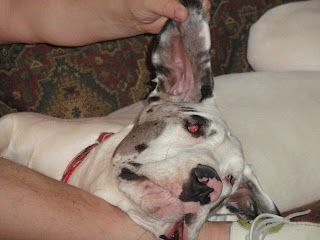 Except now he's bleeding.  Not a lot, mind you-- just enough to be mysterious.  In the lobby I discover he must've landed on his muzzle because he's skinned the front of it pretty good.  Ouch.  By the time we get into Room One, I realize he's put a thin, two-inch slit into the side of his tail.  Double Ouch.  It takes all the way until I make him sit in the garage at home to take off his leash that I discover the back of that right leg joint is also skinned.  Owwwwww x3.  In the true spirit of Momness, I would say "This is what happens when you don't listen to me!" but he just wouldn't get it.


Tomorrow morning I drop our little Ghoulie Bug off for surgery.  The vet will remove her right eye, which is constantly gooey and drippy and annoying to her because the eyelashes curl down and poke inward (entropian eye).  Dr. Bone-- yes, that's really his name-- says she will look like she's winking after the eyelid is sewn shut.  Since that's the side that has the black around the eye, this will make her look like a Winking Pirate Dog.  This will go right along with her normal conversation of "Arghghghghgh!"  Our pictures of her will take on an entirely new theme.

154 days to go before The Husband comes home.

Did someone say ::yikes::???
Posted by by Yvonne Navarro No comments:

Day 47: Dogfights, Lots of Blood, and a Firewatch

On a Saturday in mid-April, my sweet little Ghoulie-Bug started getting cranky, which is a dog owner's
diplomatic word for aggressive, snarling and lunging at the little boy across the street and his teensy Dachshund  puppy.  Eight days later she started an all-out fight with Ghost.  Poor old Ghost defended herself at first, then ran, whereupon Ghoulie started to chase her until I managed to get my hand around her collar and yank her back.  We went out for a serious training walk later that day, at which point she snarled and lunged at the couple across the street and their toddler (who was thankfully in Mom's arms).  As a result Ghoulie is segregated from all humans except for those she solidly knows, and we have a vet appointment in a week and a half to see if there's some medical reason behind this-- thyroid, right eye bugging her to the point of needing to be removed, something.  I'm afraid to type here that things have been quiet since then, because the Universe might hear me and kick me in the butt.

A couple of nights ago blood mysteriously appeared along the upstairs hallway wall in a broken double line, swooping slightly upward at dog-shoulder level, ending in a tiny double-dot pattern about a foot away.  Three full-body inspections later revealed nothing-- all dogs are fine, no bites, no bumps, no blood.  Hmmm.

Last Saturday my 83-year-old Dad fell while carrying a flat of moss roses and a clay pot across the parking lot to his apartment complex.  He went face-first into the pot, gifting himself with 17 staples in his scalp, 7 stitches above his right eyebrow, and an unknown number of stitches in his left ear to piece it back together; he also peeled the skin off both elbows and the back of his left hand.  I think he came out of this looking worse than he had after being an infantryman in the Korean war.

I have been eating a lot of vegetarian meals because, let's face it, meat is hard to prepare for an anti-cooking person.  I'm not afraid of meat preparation, but neither am I particularly fond of it.  So far-- wait for it-- I have not lost any weight.  Go figure.

And finally, just for sh*ts, giggles, and a sense of How the hell did THAT happen? I got in trouble at work today over a four-sentence telephone conversation that lasted no more than ten seconds and ended with the other person hanging up on me.  Go figure x 2.

Yesterday afternoon a firewatch alert went out because the winds are expected to pick up to 20 mph with up to 40 mph gusts, with an accompanying drop in humidity levels to single-digits.  I know I live in the desert, but isn't that Sahara-worthy or something?  For God's sake, I just found the wedding picture I lost during our double evacuation in June of 2011.   I'll be waiting for my hair to ignite.


As they say in Internet-Speak:  FML.