Excuse Me, Who Are You Again?

I blame The Husband.  Yeah, yeah, that's the ticket!

Honestly, I have to admit that I'm not that great at keeping this blog up to date, but you all knew that.  I really want to, but on the list of writing things to do, something has to give and all along, this has been it.  Still, never give up, right?

Lots has happened since that long-ago update, including Wes coming back from Afghanistan, spinal fusion surgery, even a new rescued Great Dane-- yes, our fourth.  And in keeping with our theme, we named him Grendel (yes, from Beowulf), which means we now have our own personal 4-G Network.  Ha!

Grendel, who's blind and has had a really rough life that includes being shot, attacked, and who knows what else, settled right in with Goblin, Ghost and Ghoulie.  Now that it's monsoon season in Arizona, however, the poor boy is having a pretty hard time with thunder and lightning. It's not surprising that booming noises terrify him, considering he's blind, he bumbled his way around the streets, and he's been shot. A bad storm is about the only thing that will distract him from eating his meals.  Oh, and spadefoot frogs.  They terrify him.  I am not kidding.

Our sweet, deaf Ghostie is in the end stages of renal failure, but we are fighting it with everything we have and are happy to say she's hanging in there.  Yes, she's thin, but she's happy, perky, eats (most of the time, anyway), plays, wags her tail, and generally still seems to enjoy life.  As long as the quality is there for her, we'll hang on.

Goblin is also still gracing us with his big-boy presence.  If you recall, we almost lost him three days before his tenth birthday last year (read below, if you haven't already).  Since then he's doing great, and this August 23 he will be a proud eleven years old.

Ghoulie, of course, remains our little Terrorist.  Now that she's comfortable with Grendel, she's decided that he, too, is fair game for her Troll at the Top of the Stairs Game.  She is always a Daddy's girl.

Although I haven't been updating here, I have been writing.  I've done some work for IDW in their V-Wars and Zombies vs. Robots universes, and also penned a long tale for the Rocketeer anthology.  A few other tales, too, here and there.

Where am I now, you ask?  (Of course you did.)  Why, I'm in Harrington, Maine, at the Golden Apple Studio.  Fate smiled on me and I ended up one of two writers-in-residence for their first session.  I've been hammering away at the universe and structure for a new series (nope, keeping it all a secret right now!).  Lots of writing and planning, lots of photo-taking.  I left The Husband with all the worldly chores and responsibilities, so he's getting a taste of what it's like to be me (bwahahahahhaha!).  I'll head back to Arizona this weekend, just in time to probably drive home through a monsoon downpour, collapse in the house and get lots of smooches from The Husband and pups alike, then fall into bed... so I can get up bright and early on Monday and head to work. 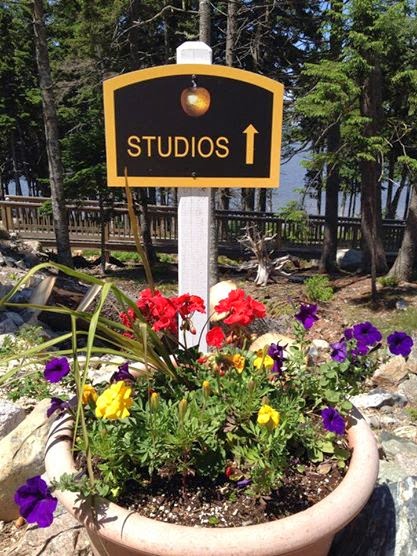 Don't want to think about that right now.

It's raining here, although I can see Harrington Bay from the window of the studio where I go to write every day.  The cottage where I sleep is even closer.  I arrived just after Tropical Storm Arthur hit the Maine coast pretty hard, but it hasn't done much more than drizzle and get breezy.  I was kind of hoping for a good thunderstorm or two, but who knows if that'll happen.  I'm enjoying my time here and the ability to focus on the new series, but I'm missing my home, S/O and puppy lovelies more than I had any idea I would.

Back to work with me!


::sound of whip cracking in the background::